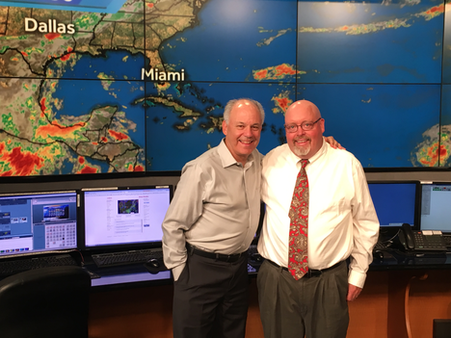 Hall of Fame Meteorologist Harvey Leonard
Mike Haggett has been in Maine since 1970. Raised in Yarmouth, he graduated from Yarmouth High School in 1988, and then went on to Southern Maine Vocational Technical Institute for Hotel & Restaurant Management.

After a 14-year career as a line cook, kitchen manager and chef in many popular restaurants and hotels in the Portland area, he hung up his apron for good in December 1998. He then moved on to commercial vehicle truck parts purchasing in Portland, where he has been for 23 years.

While preparing food and doing his part to keep trucks on the road, Mike did radio production work for All Sports 1440 AM and a brief time as a DJ for Ocean 98 FM in the mid-1990s. He then joined the Portland Pirates American Hockey League team for three seasons as an intern on the sales and marketing end and assisted with statistics for the hockey operations end.

After a move from Portland to Poland Spring in July of 2001, Mike joined the Lewiston MAINEiacs Quebec Major Junior Hockey League team soon after their arrival in 2003. He spent parts of 8 seasons with the club, first as moderator of the chat board, then worked his way into writing articles for the team program and color commentary on the radio. He was director of media and community relations at the time the club was sold and disbanded in June of 2011.

It was that following winter when Mike began his weather forecasting pursuits. 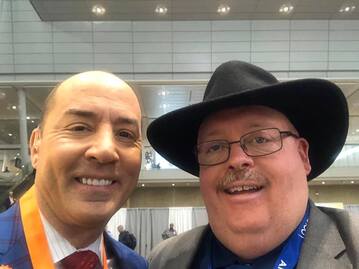 AccuWeather's Bernie Rayno
Using media connections made over the years, Mike was able to build relations with local, regional, and national broadcast meteorologists, along with others in the private and public sector. With some guidance and mentorship, he started Western Maine Weather in December 2012.

Western Maine Weather had a four-year run covering the western half of the state. With others seeing his success and style, he was encouraged to cover the whole state in a blog for the Bangor Daily News in 2016. It was at that point where Western Maine Weather then became Pine Tree Weather.

After a change in editorship and philosophy at the BDN, Mike started his own website at pinetreeweather.com after the Great October Gale in 2017 and has steadily grown a statewide audience ever since.

He and his family moved from Poland Spring to Kennebunk in April 2018.

In January 2020, Mike enrolled in the undergraduate weather forecast certification program through Penn State World Campus and completed the program in May 2021. ​

Madelyn Skinner is a rising senior at Penn State, majoring in Meteorology and Atmospheric Sciences with a focus in weather risk management. She is from Exton, Pennsylvania and is familiar with weather patterns in the northeast. She is most interested in exploring the economic effects of weather and participates in the weather risk management club at her school.

Madelyn was Mike's assistant for summer 2021, helping with scheduling and organization. 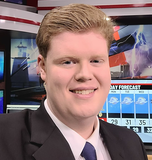 Robert Koenig is a familiar face to some people. Having forecasted for Mike during the Western Maine Weather days, he’s excited to be back this summer having more experience under his belt. Robert will be heading into his senior year at Northern Vermont University - Lyndon, studying atmospheric sciences with a concentration in broadcasting.

While at school, Robert has become active in his school’s local chapter of the American Meteorological Society, starting as Historian his sophomore year, before becoming Vice President his junior year. He has also gotten the opportunity to forecast and re-design the weather graphics for the school’s news organization News7/NewsLINC.

Robert is the morning meteorologist for WAGM-TV in Presque Isle as of January 2022. 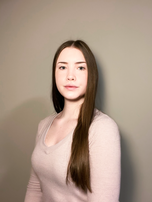 Angelina Horvath is going into her senior year at Pennsylvania State University for her undergraduate degree in Weather Risk Management. She is from Westchester, New York and has been visiting Maine most summers since 2016 and is familiar with this season's weather systems.

As a Penn State student Angelina is involved in plenty of other activities like The Weather Risk Club and the PSU Weather Data Sciences Club. She also spends her free time volunteering by hand making masks and cards for healthcare workers at the local hospital. 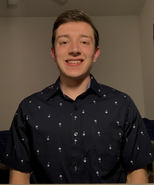 Nicholas Deamer is going into his senior year at Pennsylvania State University. The Columbia, Maryland native is pursuing a B.S. in Meteorology and Atmospheric Sciences with a concentration in Weather Forecasting and Communications. He is involved with Penn State's Campus Service, specializing in weather forecasts for specific regions, writing forecast discussions for the entire state, and record radio forecast discussions for clients which are then broadcasted on-air at select stations around Pennsylvania.

His two favorite types of weather are tropical systems and snowstorms.

He is a member of The Pennsylvania State University Branch of the American Meteorological Society and National Weather Association, Club Cross Country, PSU Weather Data Science Club, and The Weather Risk Management Club. Some of his hobbies are long-distance running, watching football, being outdoors, playing sports, and traveling.

​​Sean Melanson is going into his senior year at Penn State for his B.S. in Meteorology and Atmospheric Sciences. His interests lie primarily in severe convection, and he is currently working on a research project studying tornadoes in squall line thunderstorms. He is also involved in the Penn State Storm Chase Team, the Penn State Branch of the American Meteorological Society (PSUBAMS), and the PSU Weather Data Science Club.

​He lives in Southbury, CT and enjoys skiing, golf, and boating, especially on his 1957 Whirlwind Runabout speedboat he restored several years back. Sean also visits Maine each year, staying in the town of Monson where his grandparents have a cabin on Lake Hebron.

Aidan Toomey is a senior majoring in meteorology/atmospheric science with a focus in broadcasting/communications at Penn State. He has been interested in the weather since he was seven years old. He remembers watching The Weather Channel as a kid and loved Jim Cantore's extreme weather segments out in the field.

Aidan is the youngest of two other brothers who also graduated from Penn State.

​In his free time, he enjoys running and going on bike rides with my friends. Additionally, he enjoys spending time with my family and friends.

My favorite motto is "life is short so cherish every moment and smile!" 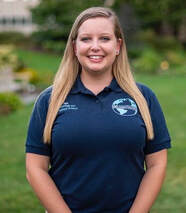 Alex Hatfield graduated with a B.S. in atmospheric science at Penn State in State College, PA. She hails from Wakefield, Massachusetts. She's familiar with the weather patterns of New England, having experienced many storms that we've gone through in Maine.

Alex has already amassed a wonderful resume which includes Community Outreach Chair for the Penn State Branch of the American Meteorological Society/National Weather Association; Head of Business for Penn State's Campus Weather Service; Secretary for the Penn State Storm Chase Team; and Ambassador for the College of Earth and Mineral Sciences. 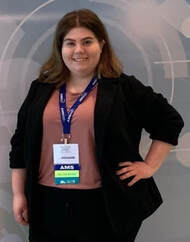 ​Kaitlyn Lardeo graduated SUNY Oswego in Oswego, NY, with a B.S. Meteorology degree with a Mathematics minor. She is from Syracuse, NY, where she’s become acquainted with the systems that affect New England and the snow it can bring in the wintertime. She was short-range forecaster for SUNY Oswego's operational forecasting station, the Lake-Effect Storm Prediction and Research Center (LESPaRC).
​
Kaitlyn has done research on weather forecasting and communication during lake effect events that has been presented at the Northeastern Storm Conference and SUNY Oswego's student conference Quest. In addition to being a weather nerd, she also plays violin for Oswego State's orchestra, chamber orchestra, and opera orchestra.

Kaitlyn is now a forecaster with the National Weather Service in Fairbanks, Alaska, and is enrolled with Millersville University for her masters in Weather Risk Management. 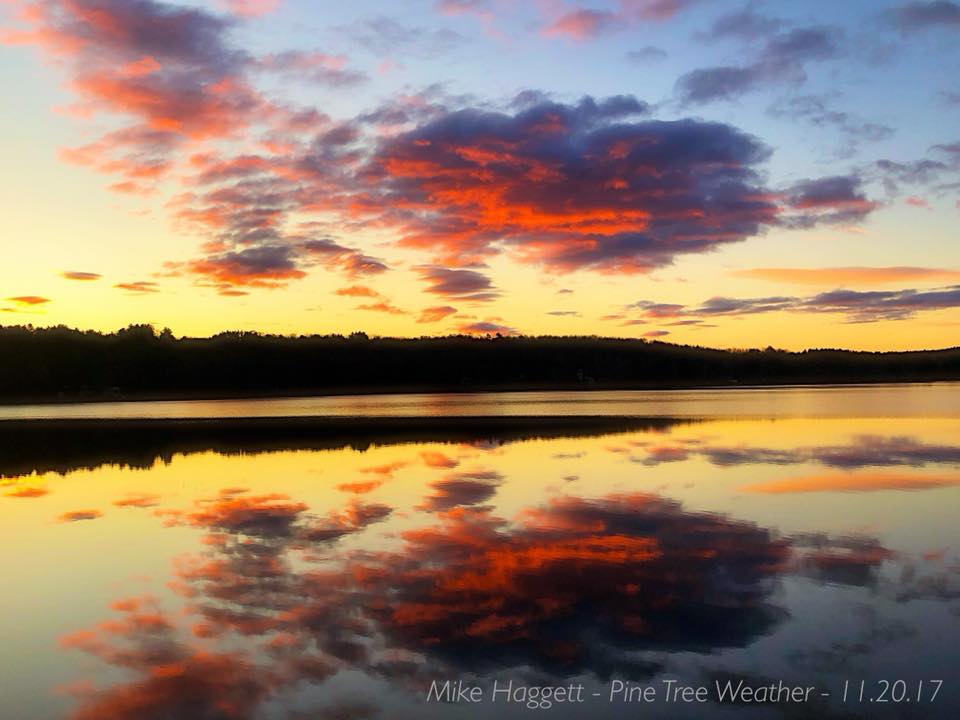